Jealousy and greed are twine evils that can reproduce any kind of evil. Anyone that nurtures one or two of these intertwine evils is a living hell, ready to consume anyone that crosses his path. Think about the pathetic story of Joseph and his brothers. What was Joseph’s offense? He came to his brothers in love, after a tedious journey down to Dothan. Jealousy blinded them that they could no more see the brother in him, nor feel the love he showed them. It so much affected them that they lost their self-worth, seeing Jacob’s love for Joseph as a subtraction of favor for them. Drowned in the ocean of jealousy, Joseph’s brothers blamed him for their self-inflicted pain. Still, Joseph continued to love them as his brothers. As he drew near, they even saw less of a human in him, and could no more call him by his name. “Here comes the DREAMER. Come now, let us kill him and throw him into one of the pits…” It sounded like killing a bad dream! Jealousy is bloodthirsty; it justifies killing and likens it to the right to freedom. But Reuben came to the rescue. Joseph was sold off to Egypt. 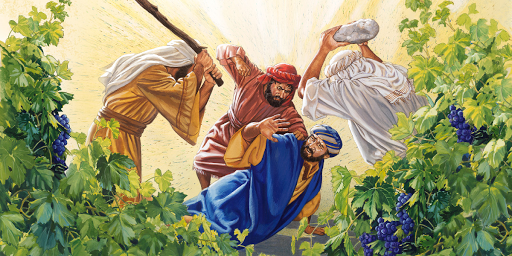 Greed possessed the servants whom the householder handed over his vineyard. They were not satisfied with their proceeds; they wanted to own it all. Greed is always anticipating pleasure in what belongs to another, thereby causing one pain in what belongs to him! After persecuting and killing the servants, they said of the Son, “This is the heir; come let us kill him and have his inheritance.” Their rejection of the son exposed their greed and wickedness and brought them to ruin.

However, Joseph became a pre-figuration of the Messiah, who was rejected out of jealousy by His people, was sold out by His very own apostle and was handed over to Roman foreigners. He was cast out of the Vineyard of Israel and was crucified. In the end, He brought salvation to all. “The very stone which the builders rejected has become the cornerstone.” Yes, if Jesus is not the CORNERSTONE of our lives, jealousy and greed shall spread their branches in our hearts. It is in Jesus that our secret thoughts are exposed and healed! Anything that will make us sell off the Messiah from our lives, or push Him out of the center of our hearts, will lead us to ruin.  Our Lenten observances will help us train our hearts to fight against greed and jealousy, and remain at peace and satisfied in Jesus. Amen.

REACHING OUT TO HIS OUTSTRETCHED HAND